Cædmon's Hymn is an unpretentious, uncomplicated 7th C hymn (spiritual poem) written in the alliterative style of its native Northumbrian AngloSaxon. It reveals the cosmology and spiritual world view of the AngloSaxon peasant, a voice of the unlettered that is usually unsung in the annals of ancient history.

This work is almost always referred to as a Christian hymn. It's not. (Specifics below.) This misperception results from a truth that is artfully concealed in the Latin of Bede's Historicia Ecclesiastica Gentis Anglorum. Bede did not provide the AngloSaxon prototype - we have an anonymous scribe to thank for that.

The language of Cædmon's Hymn references nothing particularly Christian…but does invoke 'frea' almectig. AngloSaxon scholars treat this word as 'lord,' but it is the only word in the poem derived from a name. Chosen for its alliterative value with the preceding phrase, in the forests and fens of the pre-Christian Germanic peasant society Cædmon grew up in, this theonym of an ambiguous Norse deity (Freya, goddess of fertility? Freyr, a warrior god? Frigga?) would have been resonant. But this word was not treated as "lord" by Bede, himself an AngloSaxon. He rendered this as creavit omnipotens, 'the Almighty who birthed.' Appropriation and reduction to the nominative 'lord' would have been critical for Celtic, then Roman, missionaries needing to supplant, especially in the case of Freya, such unseemly competition for Mary. But then, there's Friday, a day we can assume was not named for an abstraction.

In The Elder Gods, author Stephen Pollington notes that "there is absolutely nothing in its vocabulary or narrative that is inconsistent with a heathen creation myth" (emphasis ours), that the poem is skillfully crafted in a way that allows it to sit comfortably adjacent to Christian thought. In AngloSaxon poetry, notes Pollington, the word 'frea' arouses suspicion "precisely because it is the OE cognate of a particular Norse deity."

Bede's Historia ecclesiastica gentis anglorum was a history of the church in England, beginning with Caesar, including entries on the conversion of AngloSaxons to Christianity. Northumbria, where Bede and Cædmon lived, was but one of several English kingdoms; there was as yet no actual England (Map). Bede was an official of the church of Rome, housed and compensated by same, with the equivalent of diplomatic immunity. He was unconcerned with the grubby business of clannish power struggles and free to be an apologist, evangelist, and publisher of a document of church history. He was also free to promote Cædmon and his hymn to Christianity - or something close to it.

As an illiterate ceorl employed by the abbey at Whitby, Cædmon would have been milking cows or mucking stalls while the brothers were gathering at Lauds to sing the Invitatory.

Many AngloSaxon folc practiced both forms of belief, something explicitly encouraged by Rome to lubricate the machinery of conversion, and many of the AngloSaxon deities were assigned Christian analogs; dryctin (W.S., dryhten, L. dominus) is how the all-father Woden, who sacrificed himself to himself, was represented. But Frea was never equated to a biblical figure, such as Mary - and the demotion of 'Frea' to 'lord' was the work of Christian missionaries writing the glossaries in Latin, as at the time the AngloSaxons were still pre-literate and not writing their own history. Many scholars of AngloSaxon have taken this bait and swallowed the hook.

Though depicted sometimes in public art as tonsured and habited, Cædmon was not a cloistered brother of Streaneshalch (Whitby) - that's a privilege only the rich could afford; he would have worked in his own clothing and unless he stayed in the village, he slept in the barn, a hut, or a bunkhouse. It is noted elsewhere that he was a gifted and popular singer, with appearances noted at what today might be called beer blasts. Bede's anecdotes regarding how this hymn came to be are fictitious and hardly bear repeating, save for their incidental acknowledgement that there is no first hand source for this hymn nor do we know that we have it in its entirety. We do not actually know that there was a historical Cædmon, which is not the name of a herdsman, but of a soldier: 'man of battle.'

Cædmon's Hymn is important to history and to literature because it is the earliest extant bit of the alliterative poetry that is the hallmark of the genre in AngloSaxon, and shines its light on a spirituality and cosmology based on a ruler-God of the natural world, with no hint of concern for such Christian particulars as, say, atonement.

Now [we] must honour the guardian of heaven,
the might of the architect, and his purpose,
the work of the father of glory
as he, the eternal lord, established the beginning of wonders;
he first created for the children of men
heaven as a roof, the holy creator
Then the guardian of mankind,
the eternal lord, afterwards appointed the middle earth,
the lands for men, the Lord almighty.

Following Bede's death, copies began to escape the scriptorium with the AngloSaxon written as marginalia, showing that Bede's magnum opus had at least one scribe in the scriptorium possessed of a memory of this hymn, its vernacular, and spiritual intent. Thanks to this hack, Cædmon is the first known AngloSaxon poet. Over the next couple centuries, the marginalia took on the character of a gloss, and the AngloSaxon was periodically updated for the vernacular used in a given time time and place, which explains the different versions you may have encountered; two known families - Northumbrian and West Saxon, with several 'recensions' spread over twenty-one known manuscripts (out of 160 extant copies of Historia ecclesiastica).

What would be a Christian hymn

To come at it from the perspective of a hymnologist: to be a Christian hymn, it must name something specifically Christian - and Hwaet! at Whitby, where Cædmon toiled, that declamation would be of Christ, the Trinity, Mary, or similar. Absent such elements, it would not be considered a hymn in any monastic or Christian scholastic community of the period; the rules of hymnody were already well established. (Consider that the book containing the earliest version of a hymn we still sing today, St. Patrick's Breastplate, was documented in same 7th century cited for Cædmon's Hymn, rendered in the local Celtic vernacular and poetic style. An exact archaic equivalent, it references baptism, salvation, the Trinity, Christ, the Ascension; like Cædmon's Hymn, the Lorica of St. Patrick fully appreciates the fair beauty of earth - but it also specifically decries heathen religious practice.)

Christian hymnody of this era was highly regulated, typically office hymns in Ambrosian meters as well as festal and Eucharistic hymns, and sung almost exclusively in monasteries. The pope who sent the missionaries to England in 597 was the Gregory of Gregorian chant. (Public hymns would be refrain-based, used in ways like the hymn, already a century old and written (ahem) to celebrate the conversion of the Saxons, Salve festa dies, 'Hail thee festival day' – and nearly the identical thing happened with this hymn in 1931; click the icon in the upper right for that story.) As a folk hymn of AngloSaxon spiritual sentiment, Cædmon's Hymn celebrates the God(s) of an earth-and-sky world that provided generously (sometimes) for their needs and wants. It confirms the Psalmist's "The heavens declare the glory of God; and the firmament shows his handiwork;" and St. Paul's observation in his epistle to the Romans, " For since the creation of the world his invisible attributes are clearly seen, being understood by the things that are made, even his eternal power and Godhead."

The best Youtube and podcast recitations of AngloSaxon in general and Cædmon's Hymn in particular demonstrate that this language flows smoothly around linguistic obstacles. You should click away from any recitation that sounds like the presenter is thinking about it, working at it, or clearing a bone in their throat. Consonants impart meaning, and velarizations, palatals, and glottals emerged as a means to facilitate the flow of phonological sounds, not impede them. Listen to how smooth French, German, and Dutch sound today when spoken by a native speaker. So it was in the 7th C., and no honest purpose is served when their speech is made to sound primitive. Cædmon and his adherents were smooth talkers, and their language was musical.

Monasticism in Anglo-Saxon England: an analysis of selected hagiography from Northumbria written in the years after the Council of Whitby (Carrie Couvillon, LSU, 2005 Masters Thesis)

The Cult of Kingship in Anglo-Saxon England: The Transition from Paganism to Christianity (William A. Chaney, University of California Press, 1970) Out of print. Google Books preview.

From Fate to God (Bob Trushaw, 2013 on Anglo-Saxon Twilight) 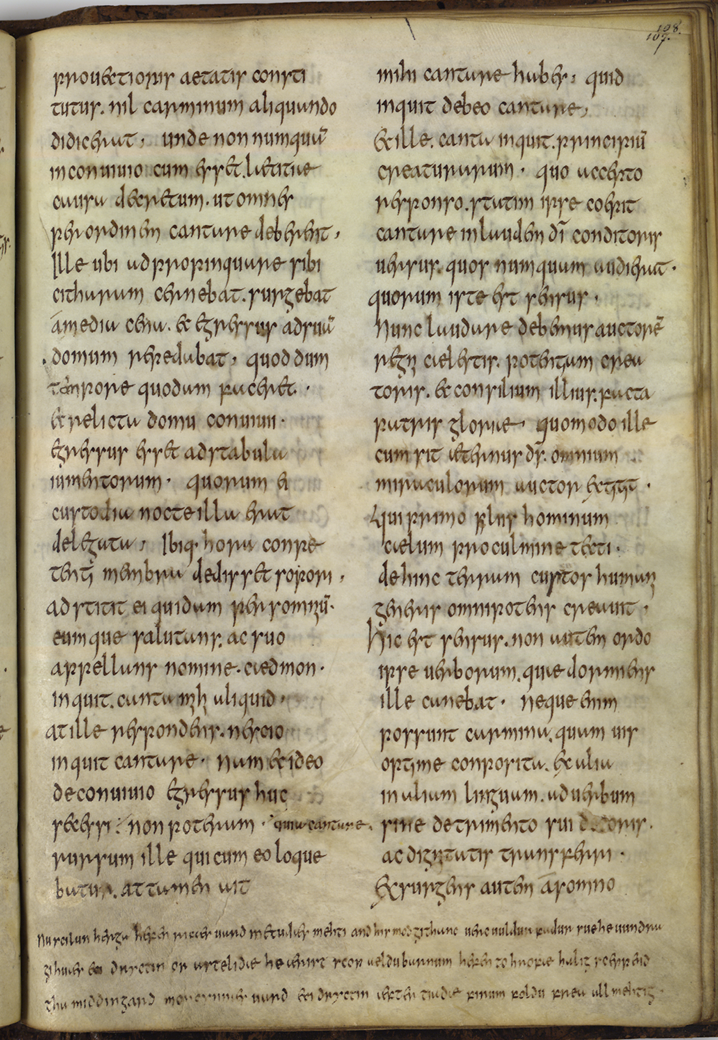 The earliest known version of Cædmon's Hymn in Anglo-Saxon appears in the bottom margin of the Historia ecclesiastica c. 800 AD

Generic renditions of the name of God in Judeo-Christian practice begins in anquity. It was roughly 3rd C BC that the tetragrammaton - YHWH - is read out as "Adonai," a plural superlative of Adon, Lord. In modern Bibles you encounter this as "LORD" (all caps) in the Psalms and Prophets, for example. God has other names in Jewish antiquity as well, including a name drawn from the conquered, specifically El from the Canaanites usually found in paired forms - Michael, Rachel, Elijah (El+YH), Bethel - but again glossed as Lord or G_d in liturgical and community practice. It's the root of Elohim, again a plural though translated as God. So, three names, one God? Consider: "Hear, O Israel, Adonai Eloheinu is One" where that Adonai is the rendered tetragrammaton; in English Bibles, it is usually "the LORD your God is one." And despite the prohibition on the tetragrammaton from Rome (2008, 'Guide me O thou great Je... Redeemer'), it is still sung…what would Easter be without Alleluia?

It is also a thoroughly modern practice

In the monastic era, the Psalms were translated into metrical Latin; in the Reformation, those same Psalms were rendered in metrical vernacular such as English or German (for example" "O God our help in ages past," Ps. 90). Now - as then - cultural incompatibilities elicit substitutions equivalent to "Lord" for "Frea"; today this is frequently employed in regard to inclusive language or theological adjustments. In your hymnal, look for how many times 'alt.' is appended to the author's credit.

Mercia and Northumbria had long been adherents of Celtic Christianity, as the Celts had never been conquered by Rome, Christianity didn't collapse in the Celtic west as it did in the Roman-occupied east and south. The great Celtic missionary Collum (Columba) had spread faith across Ireland and then across the north of the British isles, he died in 597 - the year the Roman mission under Augustine put ashore in Kent. In Cædmon's time, the Celtic missionaries would have been attached to the famed Lindisfarne monastery. The double monastery - both monks and nuns - at Streaneshalch (now Whitby) where Cædmon worked was of the Celtic variety, until a synod was held in that very abbey in 664, resolving in favor of the Roman form the differences in Latin, tonsure, and the date of Easter. The independent strength of Northumbria, and its Christianity, is why the archbishopric of York was established.

Wait. This happened recently? To a hymn written at the same time as Cædmon's?

Pearcy Dearmer in Songs of Praise (1931) altered Fortunatus's hymn "Hail thee festival day" (Salve festa dies, c. 600), changing one verse to read "God, the All-father, the Lord," a clear reference to the Norse deity Odin, Alföðr. (In Anglo-Saxon, this is Woden, for whom Wednesday is named.) Hymnal editors have since reverted to the original translation, completing a linguistic reverse full-Bede with a half-twist. (More commentary on our sister website, hymndescants.org.)